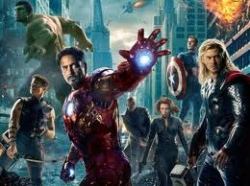 The Avengers came out September 25th on Blu-Ray, and figured it to be a great film to discuss for a first blog.  I mean its comic books and movie rolled into awesomeness who wouldn’t want to hear me troll on about it.  As someone who has been inspired by good and evil in the world of comic books at a young age, I want as many people to appreciate these kinds of films, even if you don’t consider yourself a geek.

The film is a culmination of ten years of scheming by Marvel Studios to bring all of their major comic book heroes into one epic movie.   Giving each one of the heroes his own film but loosely tying them together so the world of Marvel felt like one universe and giving more back story leading to The Avengers.  This is one of the smartest decisions Marvel Studios made in regards to their films.  Connecting the various films gave gravity and dimension to them; which is exactly why people love reading Marvel and DC comics.  I love that Spider-man and the Fantastic Four lived in New York City and in any given comic Spider-man might stop by the Baxter Building to play X-Box Kinect.

The film plays on the strengths of most movies with multiple heroes; showing the group come together, a protagonist that makes them question becoming a team, and a final big action sequence highlighting each characters unique ass kicking style.  These are not new to the medium of film or comics, but what makes Avengers a pleasure to watch even to someone who doesn’t know the difference between Batman and Man-bat is the whimsy and joy these elements are executed on screen.  Director Joss Whedon use the first three fourths of the film reintroducing these heroes (even though most have had their own movies) and by the end of the film all you want to do is see them just save the world from anonymous evil alien type creatures.  Which is the one flaw of the film because they just seem like an after thought and were not inspired by any creatures or aliens from any Marvel comic. Although, hopefully we get to see more of Thanos in the future, since it seems he was behind all the shit that happened on earth, and was the one who provided Loki with the army he needed.  In all if you like comic books you have already seen the film.  If you are curious to the world of geek then The Avengers is great film to tease your palette into a larger world where good and evil well defined and most of the women have big racks.

Thank you for reading this first official blog of Geek Triumvirate.  Amanda, Andrew and I will have many more posting in the near future.  Including a commentary about Doctor Who from the three of us, World of Warcraft (or WoW for the MMORPG insiders), and all things zombies with a report from Halloween Horror Nights at Universal Studios.  Below will be some snarky commentary of this blog by Amanda and Andrew to give some balance to our opinions.  This will be common in our individual and co-written blogs because frankly one of us probably doesn’t like something another does (typically of most friends, right?).    Goal is to bring some goofy, geek opinions from our minds to yours and maybe even get you to shine your inner fandom for the entire world to see.   With that goal in mind, the next time you have a family meeting or a work conference call, start it with AVENGERS ASSEMBLE!

Amanda- I greatly enjoyed The Avengers I don’t own many run of the mill comics myself besides The Walking Dead (more like old school Doctor Who) so I didn’t have anything to draw from. I would say a major downfall would be not introducing Hawkeye in an appropriate manner, I for one didn’t know who he was and had to look prior to watching or I would have been stuck asking during the movie. As for the gross evil aliens that were fought I don’t really mind them not being from the comics as I feel it would hinder Whedon’s creativity.