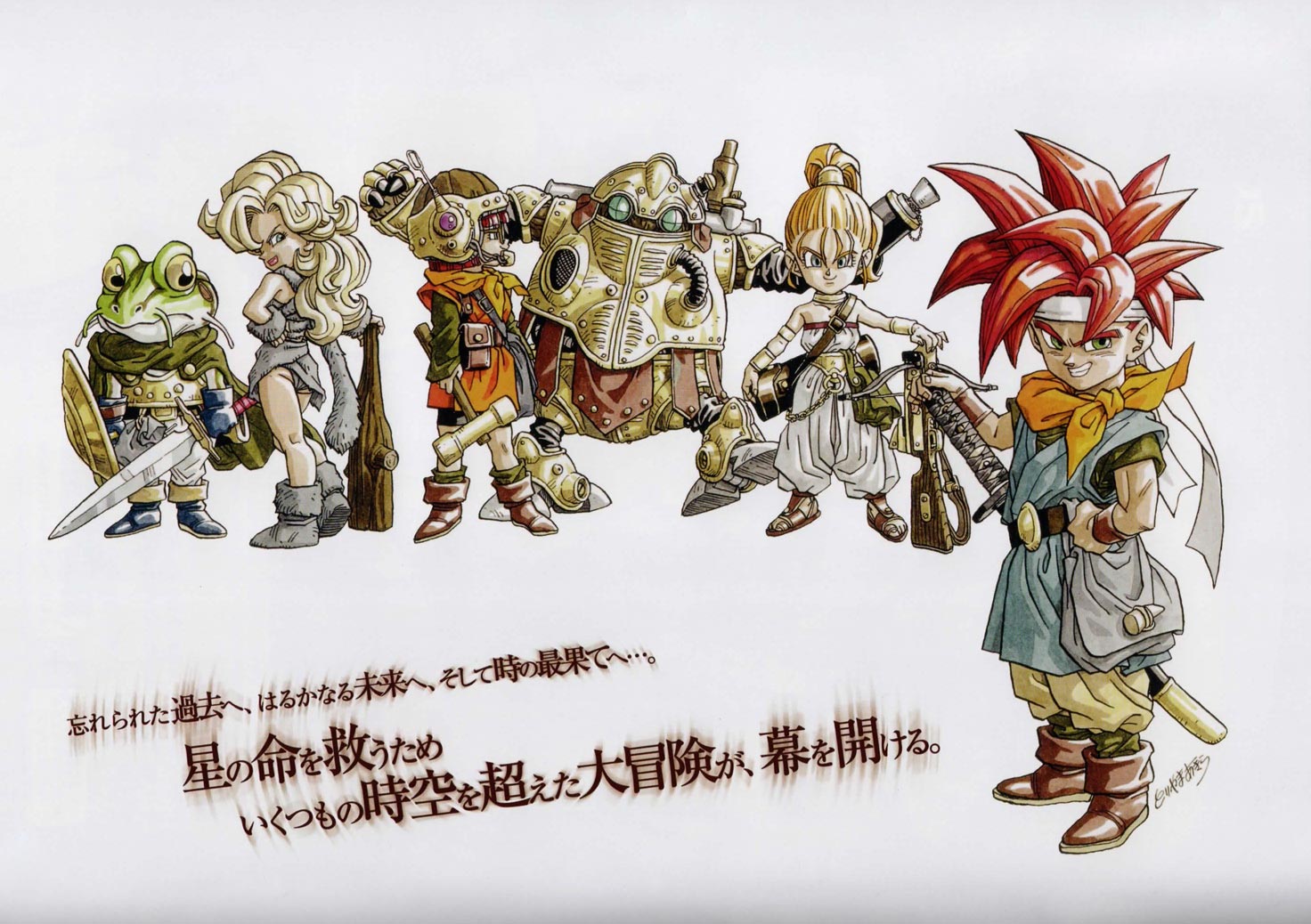 Chrono Trigger was developed and published by Squaresoft (now Square-Enix) for the SNES in 1995. Chrono Trigger’s development team consisted of Hironobu Sakaguchi, the man behind Square’s Final Fantasy series;Yuji Horii, the man behind Enix’s Dragon Quest series; and Akira Toriyama, the manga artist behind Dragon Quest and Dragonball. The game follows a group of adventurers on an adventure across time to stop a global catastrophe in the year 1999.  In 1999, Square re-released Chrono Trigger, as part of Final Fantasy Chronicles, and it was coupled with Final Fantasy IV. On November 25,2008, Square-Enix released it on the Nintendo DS.

Chrono Trigger, at the time of its release, was a critical and commercial success, was a major hit, and is viewed by many as one of the best video games of all time. All the praise was well deserved, due to it having multiple endings, with endless replay value. The game also introduced plot-related side quests, that focused on in depth character development. The battle system was unique in the fact that it was active, where you had to know what you had to do, and had tech skills that you could use with either one or 2 party members, all depending on the ability. Once you beat the game, you unlocked the New Game + feature, that let you start your game from the beginning, but you had all the weapons and stats that you had at the end of the previous game.

This is a story about a young man named Crono, his inventor friend Lucca, and a princess by the name of Marle. Crono runs into Marle at the Millenial fair. Crono and Marle go to see what new invention Lucca is unveiling, which so happens to be a teleporter. Marle volunteers to test it out, but upon testing it, her pendant reacts and opens a hole in time, and is gone. Crono follows, with Lucca shortly behind him. After some exploring, they release that they have been transported 400 years into the past. The two finally catch up to Marle, only to see her vanish before their eyes. Lucca realizes that this time period’s kingdom has mistaken Marle for an ancestor of hers who had been kidnapped, thus putting off the recovery effort for her ancestor and creating a grandfather paradox. Crono and Lucca, with the help of Frog, find AD 600’s queen, thus returning the timeline back to normal. After returning to the present, Crono is arrested on charges of kidnapping the princess and sentenced to death by the current chancellor of Guardia. Lucca and Marle help Crono to flee, haphazardly using another time portal to escape their pursuers. This portal lands them in AD 2300, where they learn that an advanced civilization has been wiped out by a giant creature known as Lavos that appeared in 1999. The three vow to find a way to prevent the future destruction of their world. After meeting and repairing Robo, Crono and his friends find Gaspar, an old sage at the End of Time, who helps them acquire magical powers and travel through time by way of several pillars of light.

Their party expands to include Ayla and Frog after they visit the prehistoric era to repair Frog’s sword. They return to AD 600 to challenge Magus, believing him to be the source of Lavos; after the battle, a summoning spell causes a time gate that throws Crono and his friends to the past. After the battle with the reptites, they witness the truth about Lavos. Lavos was an alien being that fell to earth millions of years in the past, and burrowed underground. Lavos would stay underground for millions of years, absorbing energy and growing stronger until it would return to the surface in 1999, destroying the world as we know it, and spawning a new generation. In 12,000 BC, Crono and the group discover the Kingdom of Zeal, and learn that they have learned about Lavos and plan to drain him of energy, so that they could achieve immortality through their Mammon Machine. Queen Zeal banishes them, and seals the time gate so that they wouldn’t be able to return to 12,000 BC. The group returns to AD 23oo to search for the Wings of Time, so that they can return to the Dark Ages, without the need of a time gate. Once they get the Wings of Time, they return to destroy the Mammon Machine. Instead, it is too late, and Lavos wakes up. It is revealed that one of the prophets was really Magus, who begins fighting the creature. Magus and the group are defeated, but Crono stands up to Lavos, and is vaporized by the monster.

Crono’s friends awake in a village and find Magus, who confesses that he used to be prince Janus of Zeal. In his memories, the disaster at the Ocean Palace scattered the Gurus of Zeal across time and sent him to the Middle Ages. Janus took the alias of Magus and gained a cult of followers while plotting to summon and kill Lavos in revenge for the death of his sister, Schala, but when Lavos appeared after his battle with Crono and his allies he was cast back to the time of Zeal and presented himself to them as a prophet. As Crono’s friends depart, the Ocean Palace rises into the air as the Black Omen. The group turns to Gaspar for help, and he gives them a “Chrono Trigger,” an egg-shaped device that allows the group to replace Crono just before the moment of death with a doppleganger type doll. Crono and his friends then gather power by helping people across time with Gaspar’s instructions. Their journeys involve defeating the remnants of the Mystics, stopping Robo’s maniacal AI creator, addressing Frog’s feelings towards Cyrus, locating and charging up the mythical Sun Stone, retrieving the Rainbow Shell, and helping restore a forest destroyed by a desert monster.  The group enters the Black Omen and defeats Queen Zeal, then successfully battles Lavos, saving the future of their world.