The final fate of Nightwing! The most unlikely of allies have set the Crime Syndicate in their sights – and they’re playing for keeps while the life of a hero hangs in the balance! Plus, the identity of the mysterious man in the hood is finally revealed!

Brandon and his Uncle Walter have instigated the superhero revolution, but there are those who would still stand against them. On the other side of the world, Chloe and Hutch are hiding with their enormous secret and hoping to evade the man charged with hunting renegade super humans.

Marc Spector is Moon Knight!… Or is he? It’s hard to tell these days, especially when New York’s wildest vigilante protects the street with two-fisted justice and three – that’s right, count ’em – different personalities! But even with the mystical force of Khonshu fueling his crusade, how does the night’s greatest detective save a city that’s as twisted as he is? The road to victory is going to hurt. A lot. Marvel’s most mind-bending adventure begins NOW as Moon Knight sleuths his way to the rotten core of New York’s most bizarre mysteries

The Evolutionaries are on the war path! If it’s not human, it DIES.

What does the High Evolutionary want with Nova?

All across the world, the New Warriors come together…

WITNESS! Justice and Speedball fight to save magic!

CRINGE! As Scarlet Spider refuses to play well with others.

Tomas Ramirez is now in the small Mexican coastal town of La Calma, where other new freedom fighters allies intend to test a device to end the threat of the aliens forever. But the aliens have a counterattack plan of their own, so this certainly will be the Day of the Dead.

Forty years ago, Duke McQueen was the space hero who saved the universe. But then he came back home, got married, had kids and grew old. Now his children have left and his wife has passed away, leaving him alone with nothing except his memories… until a call comes from a distant world asking him back for his final and greatest adventure. This issue launches the much-anticipated Millarworld Universe. Get in on the start of something MASSIVE! 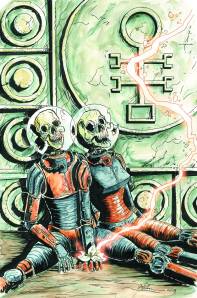 The penultimate issue of Vertigo’s acclaimed sci-fi epic is here, and Nika and William are out of time-literally! The last love story ever told nears its conclusion…but what waits beyond the end of the universe? You’ll have to read to find out

A beautiful girl wakes up in an abandoned subway station with no memory of how she got there. When men try to hurt her… they wind up dead. Where did she come from? And what is she capable of?

An all-new series from Eisner Award-winning writer Greg Rucka! Art by Toni Fejzula (Cthulhu). A surprising new heroine from the creator of Lazarus and Queen and Country!