Pick of the Week

Barbara Gordon is no stranger to dusting herself off when disaster strikes… so when a fire destroys everything she owned, she spots the opportunity for a new lease on life – and seizes it! Following the rest of Gotham’s young adults to the hip border district of Burnside, Barbara sets about building an all-new Batgirl… and discovers all-new threats preying on her peers! It’s a re-invention of Batgirl from the boots up, by the incredible creative team of Cameron Stewart (BATMAN INC.), Brenden Fletcher (WEDNESDAY COMICS), and rising star Babs Tarr!

Alien vs Predator: Fire and Stone #1 by Dark Horse Comics

As the mercenary crew of the Perses leave the horror of LV-223 behind them, one passenger reveals a terrible new danger, and the crew soon find themselves in a deadly struggle between predator and prey!

Peer over the EDGE OF SPIDER-VERSE!
Spidey teams up with Ms. Marvel in a high-flying (stepping in Kamala’s case) adventure!
Who is Spider-UK and what does he have to do with SPIDER-VERSE?
Rated T 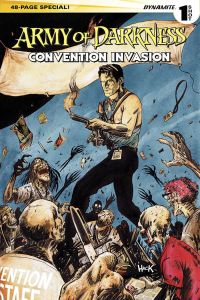 Ash Williams has been to hell and back, lost the woman he loved, and battled his evil clone – but despite all these trials, nothing can prepare him for… The Terror of the Comic Con! When a cosplay sorcerer takes his role-playing a little too far, Ash has to team up with a trio of comic readers to save the con – and New York City – from a Deadite invasion!

A Vertigo ‘Defy Covers’ issue! Once upon a time, in a small, idyllic town, there was a teen super hero named Starbright. But ‘once’ was a long time ago. Find out what became of Starbright and his greatest foe – and what their entwined destinies hold for the future of Astro City.

From the superstar creative team that brought you a new start to the Caped Crusader comes the story that could end him. Be there in October for the biggest, deadliest and most epic story yet from writer Scott Snyder and artist Greg Capullo – ‘Batman: Endgame’ begins here!

Conflict is the only constant, as the Dimensionauts are embroiled in a brutal war which threatens to engulf the fantastical land they are stranded in. But how can they uncover the horrible truth about the Pillar when every second is a fight to survive? 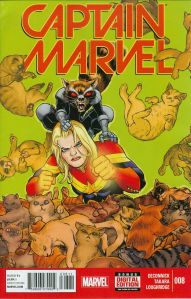 Carol’s bombastic adventure through space with her pet, Chewie, continues!
Rocket was right, though, Carol Corps! There’s more to Chewie than meets the eye! But, where did the Flerken come from?
Chewie is a Mom to hundreds. Where was she hiding all those Flerken eggs, and is this the end for Carol and her pet?

It’s the explosive conclusion to the most dangerous story of the year – return of the traitorous Natalia Kassle! Recovered and resuscitated by the enigmatic April Mayday, will Natalia join forces with her to destroy the Danger Girls? And will Abbey be forced to cross over to the role of a villain? Find out in the concluding chapter of the latest and greatest Danger Girl series! 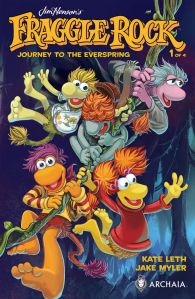 WHY WE LOVE IT: Our FRAGGLE ROCK anthologies were the first comics we published with our friends at The Jim Henson Company and ever since then, we’ve always wanted to tell one big, epic, Fraggletastic story only possible in comics. Now we have our chance in this four-issue limited series! The Fraggles will adventure to places they’ve never been before, places where Gobo, Red, Mokey, Wembly, and Boober will meet brand-new friends, sing brand-new songs, and dance their cares away!<br… >WHY YOU’LL LOVE IT:
Whether it’s ADVENTURE TIME, AMULET, or MOUSE GUARD, comics fans are coming out for all-ages stories. No one mastered that art form quite like Jim Henson, and the characters of FRAGGLE ROCK remain some of his most beloved creations. New York Times bestselling author Kate Leth (ADVENTURE TIME: SEEING RED, BRAVEST WARRIORS) and artist Jake Myler (FRAGGLE ROCK, Orphan Blade), have spun a hilarious, super fun story for longtime fans and comic readers of all ages who’ve yet to meet this lovable gang of Fraggles.
WHAT IT’S ABOUT:When the water supply of Fraggle Rock mysteriously runs dry, the Fraggles have to journey deep into the caves of Fraggle Rock to find the fabled Everspring where adventure awaits and no Fraggle has gone before! It’s the beloved characters of Fraggle Rock in their biggest story yet!

The creative team behind Monster & Madman would like to introduce you to the ongoing adventures of retired monster-hunter Frederick Allan and his family… which include a thrill-killer, a witch, and a warlock. Because sometimes crazy is the glue that binds a family together. 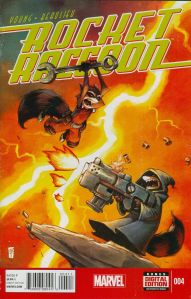 THE FUR FLIES! Rocket and his dangerous doppelgänger face off!
BETRAYED! Ensnared like some kind of terrestrial rodent, Rocket comes face-to-face-to-face-to-face-to-face with a few of the folks who want him dead!
Can the everyone’s favorite gunslingin’ Guardian of the Galaxy make it out alive and clear his name?
Rated T

Zombie Tramp has fallen in with the wrong crowd in her adventure to Las Vegas, specifically the undead clutches of the king of Sin City’s sex trade. Now she’s being forced to wed the jump-suited monster of a man in a private ceremony at the Grand Canyon! But in this unholy wedding, ‘Til death’ is just the start. Features a ‘risque’ variant cover limited to 2,000 copies! 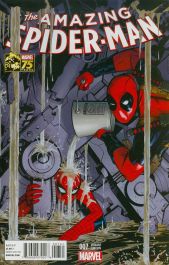 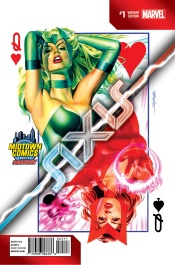 Geek Triumvirate will be making its annual pilgrimage to DragonCon in Atlanta again this year.  To countdown the days we will be sharing images, videos, and helpful tips from our previous visits.

This morning Dragon Con released their parade route for 2014.  Here is the link to for more information. Below is a map of the route and pictures from last year’s parade. 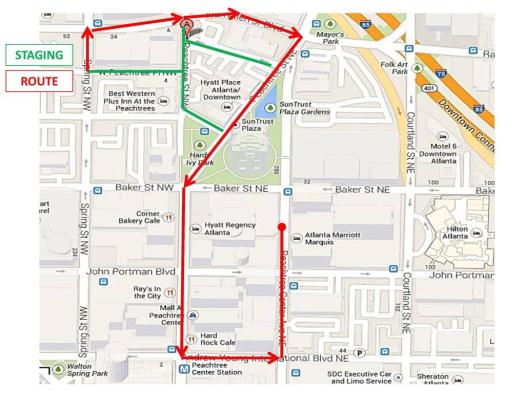